Hernias are caused by a defect in the muscle of the abdomen through which structures inside the abdomen, including fat, can protrude.

Types of hernias (depending on the site of the hernia)

Hernias can occur spontaneously anywhere in the abdomen and the groin. Depending on their locations they can be either in the middle of the abdomen, around the belly button (umbilicus), in the groin (inguinal and femoral).

Hernias can also occur following previous surgery. This is usually after open surgery along a scar (called incisional hernia).

There is another type of hernia called a hiatus hernia, which is an internal hernia, in which the stomach bulges through the diaphragm into the chest. 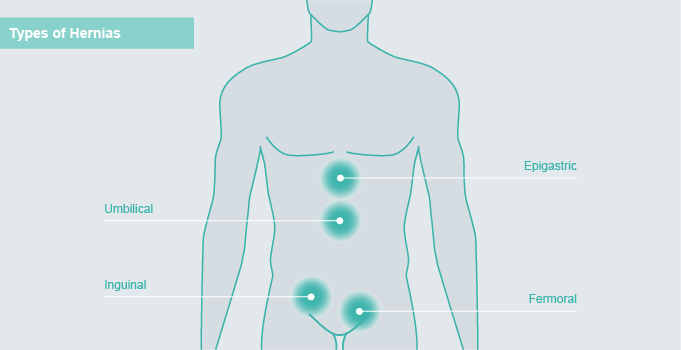 The causes of hernias

Often there may be no cause for a hernia but they do occur more often in athletic people, people who lift weights, people whose jobs involves standing for a long period of time, people who strain at stools or passing urine and people who have a chronic cough. Straining slowly causes the pressure in the abdomen to increase and this pressure slows causes a weakness in the muscles of the abdomen and a hernia develops.

What are the symptoms

Hernias can cause pain and discomfort. This is usually at the end of a day after prolonged periods of standing or walking. The pain can also be result of pressure on nearby nerves.

Hernias can also be dangerous as bowel can get caught in a hernia and cause bowel blockage (obstructed hernia) and this can even lead to gangrene of the bowel (strangulation).

How do I know if I have a hernia?

If you have a swelling in the groin or the abdomen, which often changes in size with activity then it is possible that you have a hernia. Groin hernias may also present as groin pain, without an obvious swelling, especially when undertaking physical activities.

Why should a hernia be treated?

A hernia will not disappear without any treatment. In fact it is likely that they will grow in size and will cause symptoms in time.

Hernias should be treated because of the likelihood that they could get extremely painful and maybe difficult to reduce even with manipulation. The resulting condition is called an irreducible hernia. If such a hernia involves bowel- it will result in bowel blockage and is then called an obstructed hernia. Such a condition can be dangerous. If it is left unoperated for a long time the bowel will lose its blood supply and such a condition is referred to as a strangulated hernia.

Hernias which are not causing any symptoms (asymptomatic hernias):

Surgery for hernias that are not causing any symptoms is controversial. In research studies, patients with groin hernias not causing any symptoms were divided into two groups. One group underwent surgery and the other was kept under observation. These studies showed that even 50% of the patients in the second group underwent hernia surgery after 2-3 years as their hernias started causing symptoms. Thus, if a hernia is present but not causing symptoms it is likely that the hernia will grow and cause discomfort in the future.

Hernias which cause symptoms:

Surgery is generally advisable for patients who have hernias causing pain and discomfort.

How is a hernia treated?

Surgery is the only means of curing a hernia. A truss (a special belt with a soft sponge that plugs the muscle defect) can prevent the contents of the abdomen from bulging through the hernia defect. However, long term use of a truss can increase the risk of complications. A truss should only be used on the advice of a surgeon after understanding the risk of developing complications.

Hernias are usually treated by surgery. A hernia will never spontaneously disappear.

All hernias can be operated by the open or key-hole (laparoscopic) techniques.

Open repair usually involves making an incision at the site of the hernia, reducing the hernia and closing the defect with a piece of synthetic material called a mesh. The mesh in open hernia repairs is introduced and fixed through the skin incision with sutures and sometimes with dissolvable synthetic staples.

Laparoscopic hernia repair involves making small cuts (half a cm to a cm long) through which 3 instruments are introduced to perform the surgery. The hernia is reduced from within the abdomen and the defect is closed with a mesh that is introduced into the abdomen and fixed into place with metallic staples.

Which repair – open or laparoscopic?

This decision depends on the type of hernia, the presence of more than one hernia, fitness for general anaesthesia and more importantly a thorough discussion between the patient and Mr. Moorthy.
Both types of repairs are associated with a similar rate of success and recurrence of the hernia but have differences in terms of post-operative recovery.For simple groin and abdominal wall hernias, open repair under local anaesthesia is the preferred approach. For more complex incisional hernias, the choice between open and laparoscopic surgery depends on the number of hernias and the size of the hernia defect

A pre-operative consultation with Mr. Moorthy will involve discussing the following:
• The need for surgery
• The type of surgery (open or laparoscopic)
• The type of anaesthesia (local, regional or general anaesthesia)
• The likely complications.

The risk of major complications after hernia surgery is rare.

• Infection- is extremely rare
• Pain- Pain after hernia surgery is shortlived but can persist for a few months to years after hernia surgery. This is rare and maybe a result of injury to small nerves during surgery. Thus, occurs in less than 5% of cases
• Development of swellings at the site of the hernia from blood (haematoma) or body fluid (seroma) is more common with very large hernias
• Recurrence- relapse of the hernia after surgery. Risk is lowered with the use of the mesh (less than 1% for simple hernias and slightly higher in case of the more complex incisional hernias)
• Testicular pain and damage to the blood supply of the testis are exceedingly rare complications
• Damage to the bowel during laparoscopic surgery is extremely rare (1-2 in a 1000 cases)